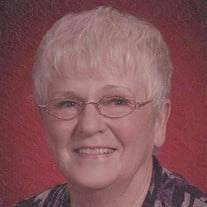 Wanda Lou (Haugen) Neve, 71 of Clear Lake, IA and formerly of Rockwell, IA went to be with our heavenly Father on Tuesday, August 19, 2014 at Muse Norris Hospice House after a truly inspirational thirteen and a half year battle with breast cancer. A visitation will be from 5-7 pm at Fullerton Funeral Home, 123 2nd St. S.E., Mason City, on Friday, August 29, 2014. A funeral service will be held at 10:30 am on Saturday, August 30, 2014 at Faith Baptist Church, 1807 South Kentucky, Mason City, with Reverend Miles Grismore officiating. Inurnment will follow at Rockwell Cemetery in Rockwell, IA. Wanda was born December 13, 1942 in Mason City, Iowa the daughter of Wilma (Foster) and Harold Haugen. She graduated from Rockwell High School and married Deets Neve on June 23, 1961. To this union four children were born. They made their home in Rockwell, later moving to Clear Lake. Perhaps her life’s greatest joy was being surrounded by her friends and family, this was especially apparent when she was able to have them over to her home. While baking and cooking were among her favorite things to do, it was made even more special when she was able to do so with her grandchildren. Her recipe’s will always be cherished and shared at family events whenever possible. Wanda relished her 10:00 coffee with her sister Linda, her Saturday family coffee’s at Lake Coffee and her weekly visits from Pat and Jolynn. Wanda was a devoted member of Faith Baptist church and was a member of the Women of FAITH. Those left to cherish her memory includes her husband, Deets Neve; children, Kristy (Rod) Molencamp, David (Sue) Neve, and Teresa Nelson; grandchildren, Ryan (Molly) Molencamp, Tim (Amelia) Molencamp, Erin Dohlman, Elisa Dohlman, Emilee Nelson, McKenzie Neve, and Trevor Neve; great-grandchildren, Riley Molencamp, Raif Baack, Rhett Molencamp, Ryne Molencamp, and Lina Neve; sister, Linda Betels (Marv); brothers, Gary Haugen (Mary Ellen) and Larry Haugen (Laurie); sister-in-laws, Kay Haugen, Avetta Haxton, Shirley Neve, and Dorthy Neve; brother-in-law, Rolly (Cheryl) Neve and Cal (Karol) Neve; and many nieces and nephews. She was preceded in death by her parents, Wilma and Harold Haugen; father-in-law, Bernard Neve; mother-in-law, Kurna Neve; son, Steven Neve; brother, Bob Haugen; brother- in-laws, Kenneth Neve, Maynard Neve, and Jerry Haxton. Those planning on expression of sympathy may wish to consider memorials to Hospice of North Iowa and Faith Baptist Church.

Wanda Lou (Haugen) Neve, 71 of Clear Lake, IA and formerly of Rockwell, IA went to be with our heavenly Father on Tuesday, August 19, 2014 at Muse Norris Hospice House after a truly inspirational thirteen and a half year battle with breast cancer.... View Obituary & Service Information

The family of Wanda Lou Neve created this Life Tributes page to make it easy to share your memories.

Send flowers to the Neve family.