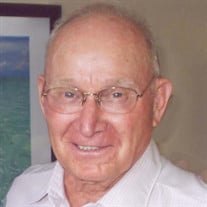 Virden J. Demaray, 89 of Rudd, died Saturday, December 2, 2017 at the Nora Springs Care Center. Memorials services will be held at the 11:00 am, Friday, December 8th, 2017 at Rudd United Methodist Church, 611 6th St. Officiating will be Rev. Wendy Johannesen and Rev. Jim Roth. Visitation will be one hour prior to services at the church. Memorials may be made to the Virden J. Demaray memorial fund. Virden has donated his body to education at the Mayo Clinic in Rochester, Minnesota. Inurnment will be at a later date. Virden Jay was born at home on January 4, 1928 close to Floyd Iowa. He was one of five children of Jay L. and Dorothy H. (Mathers) Demaray. He attended country school and then began his farming career on the family farm delivering milk, and caring for the family livestock. He worked for a short time at Larson and Collett implement dealership in Rudd then took up farming again which he did the rest of his life. He was united in marriage to Margery Field on April 16, 1949 at the United Methodist Church in Charles City. To this union was born five sons. Virden’s hobbies included woodworking where he enjoyed making small furniture projects for Christmas presents for family. His workshop was always busy as Christmas neared and well-remembered was a Christmas when he ran out of time and wrapped a piece of wood for each present that would be finished after Christmas. He enjoyed Blue Grass music and camping with family. Virden was a devout exerciser and wore out 2 stationary bicycles and has around 30,000 miles on the remaining Schwinn. He is well known for loving Christmas time when we would break out the apron, and start baking for the holiday season. He was master of the kitchen making candy, cookies, and popcorn balls for family and friends. He also baked bread and made the potato salad for family events and funerals in town at the Methodist Church where he was a member. Virden was a 50-year member of the Moose Lodge in Charles City. Virden is survived by his wife of 68 years Margery, five sons and daughter-in-law’s, Roger and his wife Lou Ann of Rockford; Ronald and his wife Ellen of Horton, KS; Randy and his wife Wendy, Nora Springs; Rick and his wife Julie of Rockford, and Russell and his partner Candace, Charles City, 12 grandchildren, Aaron Marzen, Tiffany Selmecki, Justyn Fox, Jason and Jess Demaray, Natalie Wedeking, Brandon, Chris, Caleb, and Cody Demaray, Cara Parno, and Courtney “Buck” Demaray; 19 Great Grandchildren, and two siblings Leighton Demaray Albert Lea; and Gene (Edie) Demaray, Story City, Iowa, one sister-in-law Karol Kelsey, and a brother-in-law Dennis (Sharon) Field, both of Rudd. Preceding him in death are his parents, a Great Granddaughter Daisy Fox, a friend who was family, Walter Meyer, one sister in infancy, two brothers Irwin “Red”, and Dene who was a twin to Gene, and two sister-in-law’s and one brother-in-law preceded Virden in death. Fullerton Funeral Home, 123 2nd St SE, Mason City, IA 50401, 641-423-8676 www.Fullertonfh.com. Facebook/Fullertonfuneralhomes

The family of Virden Jay Demaray created this Life Tributes page to make it easy to share your memories.

Send flowers to the Demaray family.