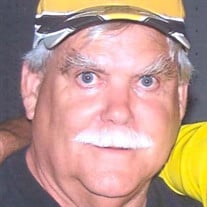 Thomas “Tom” Murphy Johnston, 75, of Mason City, IA died Tuesday, August 27, 2019 at his home. A visitation will be held from 5-7 p.m. with a 7:00 p.m. Rosary then Wake Service on Tuesday, September 3, 2019 at Fullerton Funeral Home, 123 2nd St SE, Mason City. A Mass of Christian Burial will be held at 10:30 a.m. on Wednesday, September 4, 2019 at Epiphany Parish-Holy Family Catholic Church, 722 N Adams Ave, Mason City. Father Josh Link will be officiating. Burial will follow at Memorial Park Cemetery in Mason City. In honor of Tom, the family requests those in attendance wear either Iowa State/Packer apparel or dress casual. Tom was born on January 21, 1944 in Victoria, Texas to Harold and Virginia (Morris) Johnston. He was raised in Mason City by his grandparents, Harvey and Matilda Johnson. Tom graduated from Mason City High School in 1962. Throughout his life he was self-employed and worked primarily as a salesman. On August, 26, 1989 he was united in marriage to Avis (Schmitt) Johnston. Tom was a past Exalted Ruler of the Mason City Elks Lodge, 4th Degree Knights of Columbus, member and former administrator of the Moose Lodge and member of Holy Family Catholic Church. In his free time he really enjoyed cooking; especially barbequing. Tom took classes to become a barbeque judge for the Kansas City Barbeque Society and Steak Cook-Off Association. Every morning you could find Tom having coffee with fellow friends at the Mason City Senior Center. Tom was an avid sports fan and enjoyed watching the Packers, Iowa State Cyclones and NASCAR races. He enjoyed traveling to Texas to watch NASCAR races and Wisconsin to visit family. Those left to cherish Tom’s memory include his wife, Avis; children, Michael Johnston and Thomas Johnston II and their mother Sally Johnston; grandchildren: Miranda, Tommy and Mikala; brother, Harold Johnston and many nieces and nephews. He was preceded in death by his parents and brother, Robert “Sunny” Johnston and his wife Mary Jo.

The family of Thomas "Tom" Murphy Johnston created this Life Tributes page to make it easy to share your memories.

Send flowers to the Johnston family.