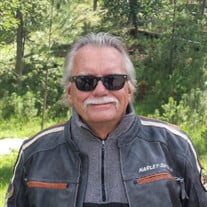 Not sure what to send?

Thomas Eugene Minert, 74 of Brownsville, Minn, passed away peacefully Thursday (May 12, 2022) at the Mayo Clinic Hospital in La Crosse, Wis. Funeral Services will be held at 1:30 pm Friday (May 20, 2022) at St James Lutheran Church, 1148 4th St SE in Mason City, Iowa. Reverend Sid Bohls officiating. Visitation will be from 4:00 to 8:00 pm Thursday (May 19, 2022) at Fullerton Funeral Home located at 123 2nd St SE in Mason City and again one hour prior to services at the church on Friday. Interment will be in Dumont, Iowa, at the Dumont Cemetery where Tom will rest in peace alongside his parents. Those planning an expression of sympathy may wish to contribute to the Thomas Minert Memorial Fund, PO Box 176, Brownsville, MN, 55919. Thomas Eugene was born November 22, 1947, in Mason City to Dwight and Gladys Ina (Swensrude) Minert. He graduated from Mason City High School in 1966. Throughout his life Tom spent many hours boating, fishing, hunting and camping with friends and family as well as horseback and motorcycle riding. His love of adventure, travel and the outdoors made for many loyal friendships and happy memories throughout the years. Sun, fun and friends in Florida were always on his mind as he looked forward to boating and fishing in the Keys. After 20 years with Harley-Davidson of Mason City, Tom became the dedicated proprietor of the family-owned Cedar River Harley-Davidson Shop (CRHD) in Charles City, Iowa, from 2002 to 2018. Because of Tom's reputation, knowledge and loyal staff, CRHD became a destination for both the casual and avid motorcycle rider. With pride, customers often announced, "I bought my motorcycle from Tom "Hawk" Minert." It was from 1993 - 2001, Tom enjoyed fun-filled years with friends selling Baja Outlaw Boats on the Mississippi River at My River Home Harbour in Portage Des Sioux, Mo. Tom's enthusiasm for boating, great customer service and winning personality ultimately earned him company recognition and awards for top sales as well as many friends along the way. Tom's life is celebrated by his children Scott Minert, former daughter-in-law Karen Minert and Kristin Minert; six grandchildren and six great-grandchildren; great-nieces and nephews. He is survived by two siblings, Ronald Minert (Suzanne) and their children Rhonda Minert McLeland, Stephen Minert, Travis Bailey, Ryan Bailey, and Matthew Bailey; Bonita Skoglund and her children Jason Skoglund (Stacey) and John Skoglund (Shannon). He was preceded in death by his parents, favorite Aunt Emma (Swensrude) Aley and faithful golden retriever, JoJo. Fullerton Funeral Home, 123 2nd St SE, Mason City, IA 50401, 641-423-8676 www.Fullertonfh.com Facebook/Fullertonfuneralhomes

The family of Thomas E. Minert created this Life Tributes page to make it easy to share your memories.