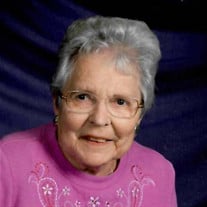 Shirley Ann (Hage) Jacobson, 88, of Charles City, IA died Wednesday, January 29, 2020 at 11th Street Chautauqua Guest Homes. A funeral service will be held at 11:00 am with a one hour prior visitation on Saturday, February 1, 2020 at Fullerton-Hage Funeral Home, 401 Blunt Street, Charles City. Pastor Steve Hansen will be officiating. Burial will follow at Riverside Cemetery in Charles City. Shirley was born on October 21, 1931 in Jewell, Iowa to Gladstone and Tina (DeBolt) Smith. She graduated from Whitten High School in 1949, then went on to attend The University of Iowa and graduated with a teaching/education degree in 1953. Shirley moved to Charles City in 1956 where she taught night school and substitute teaching at Charles City High School. She was united in marriage on August 15, 1954 to Almer “Bud” Hage and to their union one son, Neal Hage was born. Together the couple owned and operated Hage Funeral Home for 35 years until Bud’s passing in June of 1991. On July 17, 1995 she was united in marriage to Virgil Jacobson until his passing in March of 2014. The couple had many wonderful years together and really complemented each other well. Together they traveled to Alabama, Arizona, California, Florida, Hawaii, Las Vegas and Texas. A favorite routine of the couple was to regularly check the paper for the stock market and have discussions. In her free time Shirley enjoyed walking, golfing, playing bridge and going to the Iowa Hawkeye’s basketball and football games. Shirley had many affiliations including: Alpha Chi Omega Sorority, JQ Chapter of PEO, Lifetime member of the University of Iowa Alumni Association, Chamber of Commerce, YMCA, Charles City Country Club, various women’s church circle groups, and American Legion Auxiliary. She was very involved with the Charles City community and proud University of Iowa alumnus. Those left to cherish her memory include her daughter-in-law, Tina Ange; grandchildren, Regan and Sayer Hage; great-grandson, Liam Hage; step-children, Steve (Nancy) Jacobson and Dave Jacobson; step-grandchildren, Jennifer (Courtney) Pero and Christin (Stephen) Hall and step-great-grandchildren, Ryan and Avery Pero and McKenna, Preston and Sloane Hall. She was preceded in death by husbands Almer “Bud” Hage and Virgil Jacobson; son, Neal Hage; sister, Patricia Hodson and her husband Dr. M.L. Hodson and one sister in infancy.

Shirley Ann (Hage) Jacobson, 88, of Charles City, IA died Wednesday, January 29, 2020 at 11th Street Chautauqua Guest Homes. A funeral service will be held at 11:00 am with a one hour prior visitation on Saturday, February 1, 2020 at Fullerton-Hage... View Obituary & Service Information

The family of Shirley Ann (Hage)Jacobson created this Life Tributes page to make it easy to share your memories.

Send flowers to the (Hage)Jacobson family.