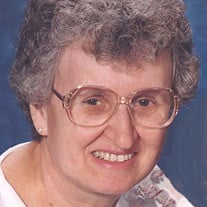 Maxine Mae Trettin Tegtmeier, 81, formerly of Rockford, IA died Tuesday, November 5, 2019 at the Iowa Veterans Home in Marshalltown, Iowa. A visitation will be held on Monday, November 11, 2019 from 5-7 p.m. at the Zion Lutheran Church, 805 E Main Ave, Rockford. A funeral service will be held at 11:00 a.m. with a one hour prior visitation on Tuesday, November 12, 2019 at the church with Pastor Robert Scheurer officiating. Burial will follow at Riverside Cemetery in Rockford. Maxine Mae Trettin Tegtmeier was born on February 24, 1938 on the Trettin family farm east of Rockford, Iowa to Wesley and Dallas (Schindele) Trettin, the oldest of three children. Maxine graduated from Rudd High School in 1955. After high school graduation, Maxine worked in Mason City as an operator at the telephone exchange. On October 27, 1957, Maxine married Paul Tegtmeier at the Rock Creek Lutheran Church north of Rudd, Iowa. Paul and Maxine started their life together in the Burchinal area and then moved to Rudd. To this union were born three sons, Daniel, Rick and Bill. They later moved to a farm south of Rudd, then to Rockford before settling in their final home on the northeast side of town in 1964. With the boys all in school, Maxine went back into the workforce beginning at her uncle’s business, Trettin Hatchery, then to Salsbury Laboratories in Charles City. She spent the last 20 years of her working career in the laundry department at Mercy Hospital in Mason City. At the age of 62 shortly after her retirement in 2000, Maxine was diagnosed with frontal lobe dementia. Prior to her diagnosis, Maxine enjoyed gardening, bird watching, caring for her cats, knitting, reading, spending time with her grandchildren and time with friends and family playing cards. Paul was her caregiver in their home until his death in June, 2010. Upon Paul’s death, Maxine moved to the Iowa Veterans Home in Marshalltown where she passed away from complications of her disease on November 5, 2019. Those mourning Maxine’s death are sons, Daniel (Tori) of Marion; Rick (Sherry) of Urbandale and Bill (Tammy) of Polk City; grandchildren, Lynette (Ryan) Bailey of Urbandale, Nate (Megan Northrop) Tegtmeier of Waukee, Eric (Hannah Peterson) Tegtmeier of Norwalk, Sarah (Bryce) Moss of Urbandale, Bryanna (Austin) Lydik of Huxley, Seth Tegtmeier of Iowa City and Brice Tegtmeier of Ankeny; great-grandchildren Tynlie and Rypken Bailey; brothers Jim (Erika) Trettin of Mentor, OH, Steve Trettin of Mason City; sisters-in-law Lois Fisher of Nashua; Thelma (Dave) Nixt of Greene, Janice (Ken) Beznoska of Mason City, Marla Tegtmeier of Marble Rock and many nieces, nephews and friends. She is preceded in death by her parents and in-laws; husband Paul, sisters-in law Alice Trettin, Marie Nordman, Elizabeth Tegtmeier, brothers-in-law Roy Tegtmeier, Allen Tegtmeier, Irven Tegtmeier, Gerald McNamara, Kenny Fisher, Robert Nordman and Bill Shafer In expression of sympathy, memorials may be directed to the Iowa Veterans Home, 1301 Summit St, Marshalltown, IA 50158.

The family of Maxine Mae Tegtmeier created this Life Tributes page to make it easy to share your memories.

Send flowers to the Tegtmeier family.