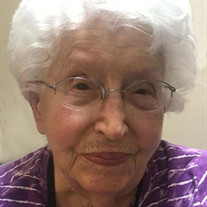 Margaret H. Maupin, 101, formerly of Rockford, IA died January 18, 2022, at the Nora Springs Care Center. Private family graveside services will be held at a later date in Riverside Cemetery, Rockford. Margaret was born on Feb.12, 1920 in Plainfield, IA to Bo and Laura (Colburn) Ellison. On May 26, 1940 she was united in marriage to Glennys R. Maupin. To their union three children were born and the couple spent 63 wonderful years together. In 1958 they moved to the Maupin farm southwest of Rockford where they lived until 2003 when they moved to Rockford. After retirement, they spent over 20 years as “snowbirds” traveling to Mission, TX for the winter. Margaret was an avid gardener and spent many loving hours tending her roses and other flowers. She loved birds and had a long-time companion, a cockatiel named Charlie. Margaret was a life-long member of the First United Methodist Church Rockford where she served on various committees and organizations. For more than 40 years Margaret and Glen were active square dancers. They belonged to the Campers Square Dance Association and traveled to many campgrounds in Iowa and all over the states. Those left to cherish her memory include her daughter, Carolyn and (Tom) of Littleton, CO; her son, Dean and (Cathy) of Davenport, IA; five grandchildren, Tod, Elizabeth, Kim, Kristen, and Karli; eight great-grandchildren; brother-in-law, Ken Maupin (New Hampton, IA); and several nephews and nieces. She was preceded in death by her husband, Glen in 2004, her daughter, Judy in 2020; a great-grandchild; her brothers, Duane, Milan, and Bo; parents, Bo and Laura; and several in-laws and many friends. In expression of sympathy memorials may be made to First United Methodist Church, Rockford, IA (21 3rd St NW)

The family of Margaret H Maupin created this Life Tributes page to make it easy to share your memories.

Send flowers to the Maupin family.