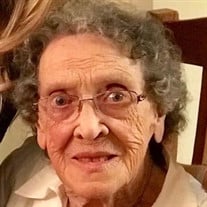 Lorraine Margaret Milloy, 89 of Rockford, IA died on Sunday, June 23, 2019 at Heritage Care Center in Mason City, IA. A visitation will be held from 5-7 p.m. on Wednesday, June 26, 2019 at Fullerton Funeral Home, 302 West Main, Rockford, IA. A funeral service will be held at 10:30 am with a one hour prior visitation on Thursday, June 27, 2019 at First United Methodist Church, 21 3rd Street Northwest, Rockford, IA. Pastor Dennis Burns will be officiating. Burial will follow at Riverside Cemetery in Rockford. Lorraine was born on April 21, 1930 in Riceville, IA to Raymond and Cora (Anderson) Munsell. She graduated in 1947 from Rockford High School and then went on to teach at several township country schools. On June 28, 1952 she was united in marriage to Calvin Milloy and to their union, two children were born. After Calvin returned from the service the couple resided and farmed together in Rockford for the duration of their lives. In her later years after Calvin had passed away, Lorraine began working in retail for Sears in Mason City and then K-Mart in Charles City, where she retired at the age 86. Lorraine was an extremely hard-worker her entire life. She really enjoyed being outdoors and was complemented often on her yard. Lorraine kept up with the mowing and was also an avid gardener. She had many plants and flowers throughout her home. In her free time she enjoyed reading and frequented the library often. Above all else, her family was most important. Lorraine always attended her children and grandchildren’s activities and events. She never refused babysitting her grandchildren and loved spending time with her family; especially holidays, which she hosted. Lorraine was an excellent baker and will be remembered for her delicious pies and cookies she made, but especially the pies. Those left to cherish her memory, include her two children, Melody Demaray and Milt (Lori) Milloy; six grandchildren: Lindsay (Dustin) Rook, Abby Milloy, Chad Demaray, Quincy Milloy, Brittany (Roy) Dowse and Mandy Demaray; four great-grandchildren: Sydney, Macy and Beckett Rook and Demi Dowse. She was preceded in death by her husband, Calvin Milloy; parents, Raymond and Cora Munsell; one brother, Virgil Munsell and three sisters, Arlene Johnson, Fern Wahl and Maxine Pint.

The family of Lorraine Margaret Milloy created this Life Tributes page to make it easy to share your memories.

Send flowers to the Milloy family.