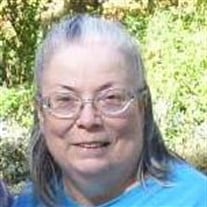 Linda Lucille Logan, 69, life long resident of Charles City died Tuesday morning, April 5, 2016 at the Floyd County Memorial Hospital, Charles City. A mass of Christian Burial will be held 1:00 pm Friday, April 8, 2016 at Immaculate Conception Catholic Church, 106 Chapel LN, Charles City with Father Gary Mayer, officiating. Visitation will be one hour prior to services in the Parish Hall. Interment will be in Calvary Cemetery. Those planning an expression of sympathy may wish to consider memorials to the Linda L. Logan memorial fund. Linda was born on January 2, 1947, in Charles City the daughter of Ivan and Vida Mincks. She graduated from Charles City High School. On January 22, 1966 she was united in marriage to Edward “Ed” J. Logan at Immaculate Conception Catholic Church where she remained a faithful member and believer in all the good that God provides. She spent a considerable portion of her life sharing her beliefs with friends and family. She and her husband were very musically talented and sang and played with bands from the area. These gifts were passed down to her children who also share them with others. Linda had her native side and relished stories of her youth with her family which included stories of using a sling shot, and her family outings. She doted on her two grandchildren, and loved to surprise people with small gifts, and telling jokes and pulling pranks on them. She was a collector of cookbooks, all kinds of angels, spending time in her yard, and doing crossword puzzles. For a time she worked as a waitress in the Uptown Café. A few years ago she had a massive stroke but never gave up and learned how to read, do math and drive the car again with her families help. She was quick witted, always had a bright aura of love about her and was always full of excitement. She enjoyed watching reality shows and WWE wrestling. Those surviving Linda include two sons, Patrick Logan and his fiancé Carrie Fiser, Daniel Logan and his girlfriend Shahara Dowd, all of Charles City, two grandchildren Sequoya and Stephanie Logan, and one brother Lanny (Gloria) Mincks of Charles City. Her parents, husband Edward on August 25, 2006, one son Brian Logan, and two brothers Jay and Mike Mincks preceded her in death. Fullerton Hage Funeral Home and Cremation Services, 401 Blunt Street, Charles City, IA. 50616 (641) 228-4211. www.Fullertonfh.com Facebook/FullertonFuneralHomes

The family of Linda L. Logan created this Life Tributes page to make it easy to share your memories.

Send flowers to the Logan family.