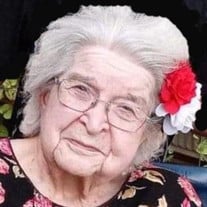 Jeanette Marie Nicholson, 86, of Mason City, IA died on Sunday, May 1, 2022 at Good Shepherd Health Center. A funeral service will be held at 2:00 pm on Friday, May 6, 2022 with a one hour prior visitation at Fullerton Funeral Home, 123 2nd St SE, Mason City. Chaplain Al Polito from St Croix Hospice will be officiating. Burial will follow at Elmwood-St Joseph Cemetery in Mason City. For full obituary please visit our website. Jeanette was born on September 5, 1935 in Iowa City, IA to Louis and Isabella (Seifert) Duda. She was raised in Britt, IA and later moved to Mason City and graduated from Mason City High School in 1953. On April 24, 1954 she was united in marriage to the love of her life, Marshall Nicholson at the Little Brown Church in Nashua, IA. The couple adopted two children, daughter Judeane and son Patrick. Jeanette and her family resided in Plymouth, IA while their children were growing up then later moved to Mason City in 1978. While living in Plymouth, Jeanette was very active in her community. She was involved with the Girl Scouts for many years and also Mayor of Plymouth. After moving to Mason City, Jeanette worked at Damon’s Department Store then managed the Autumn Park Apartments along with her husband for nearly 20 years. The couple enjoyed going to auctions and casinos, car rides and playing scratch tickets or pull tabs. Jeanette loved watching adult league softball games and attending her grandson’s wrestling, little league and soccer games. She was always watching her family’s sporting activities. She liked her law enforcement and mystery T.V. shows and doing word searches. Jeanette also had an extensive collection of elephants; she loved anything elephant. Those left to cherish her memory include her daughter Judeane Nicholson, grandchildren: Brandon (Lexi) Anderson, Christopher Nicholson and Andy (Mary) Bratrud, great-grandchildren: Gannon, Paisley and Brayden Anderson and many other family members and friends. She was reunited in heaven with her husband Marshall Nicholson in 2016, son Patrick Nicholson, parents Louis and Isabella Duda, sister Judy Ann Hackbart and brother Robert Duda.

Jeanette Marie Nicholson, 86, of Mason City, IA died on Sunday, May 1, 2022 at Good Shepherd Health Center. A funeral service will be held at 2:00 pm on Friday, May 6, 2022 with a one hour prior visitation at Fullerton Funeral Home, 123 2nd... View Obituary & Service Information

The family of Jeanette Marie Nicholson created this Life Tributes page to make it easy to share your memories.

Send flowers to the Nicholson family.