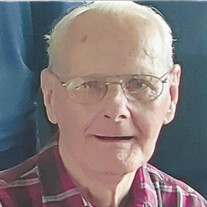 Jay D. Hinrichs, 85 of Rockwell, died Saturday, January 22, 2022 at Mercy One Hospice of North Iowa in Mason City, Iowa. Graveside services will be held 4:00 PM on Friday, January 28, 2022 at the Rockwell Cemetery, in Rockwell, Iowa. Visitation will be held from noon Friday until 3:45. Those planning an expression of sympathy may wish to consider memorials to Jay Hinrichs memorial fund, in care of Bradley and Ruth Griffith, 7933 Casey LN, Lincoln, NE 68516. Jay, a triplet, was born August 21, 1936 in Rochester Minnesota to Maurice and Louise Edge. He joined 8 other siblings. Shortly after his birth and the death of his mother, he was adopted by his aunt and uncle, John and Linda Hinrichs. His education started in Rockwell, graduating from the Rockwell High School. He continued to Mason City Junior College earning an Associates of Arts degree and then a diploma in business from the Hamilton School of Commerce. Since the early 70’s he was employed at Dugan’s in Rockwell doing everything and anything in both the café and the grocery store. He retired at the age of 65. No one knows if his heart was bigger or his sense of sharing with others was larger. Jay was always willing to lend a hand and give a smile to whoever needed it. He also was the keeper of the Hinrichs family history and photos. Not many knew he wrote poetry of which several were found following his death. He was an avid Rockwell school sports follower. He also enjoyed watching the Hawkeyes, Vikings and Twins sports teams. Occasionally you could get him to play a board game. Jay is survived by one triplet brother Jerry Hinrichs of Mott, North Dakota and many nieces and nephews. Preceding him in death were his parents, one triplet brother Jene Hinrichs as well as 4 other siblings. Fullerton Funeral Home and Cremation Services, 120 S. 3rd ST., Rockwell, Iowa 641-822-3191, www.Fullertonfh.com

The family of Jay D. Hinrichs created this Life Tributes page to make it easy to share your memories.

Send flowers to the Hinrichs family.