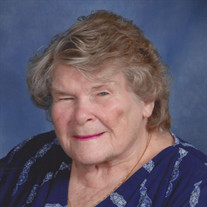 Frances “Fran” Delia McIntire, 92, formerly of Charles City, IA died Tuesday, September 26, 2017 at Mercy Medical Center of North Iowa in Mason City. A visitation will be held Friday, September 29, 2017 from 5-7 pm, ending with a Rosary Service at Fullerton-Hage Funeral Home, 401 Blunt Street, Charles City. A Mass of Christian Burial will be held at 10:30 am on Saturday, September 30, 2017 with a one hour prior visitation at Immaculate Conception Catholic Church, 106 Chapel Lane, Charles City. Reverend Gary Mayer will be officiating. Inurnment at Calvary Cemetery will take place at a later date. Frances was born on January 4, 1925 in Bradgate, IA to William and Delimah (Bernier) Phillips. She was raised and attended school in Rolfe, IA. Frances met the love of her life, James McIntire at school and the couple married on October 17, 1949 at St. Mary’s Catholic Church in Rolfe. Frances attended college in Fort Dodge, IA at St. Joseph’s Mercy Hospital to become a Registered Nurse. The couple resided together in Emmetsburg, IA for a couple of years before moving to Charles City. Frances spent 41 years of her life as a Registered Nurse; she worked for Pocahontas County as a home health nurse and Chautauqua Guest Homes. Her husband James was a Licensed Funeral Director at Grossman-Hage for 24 years. Together they had eleven children and lived within blocks of the funeral home. In her free time, Frances loved to visit with people. She was very outgoing and made lots of friends throughout her lifetime. She enjoyed playing card games such as cribbage. In 1985, her husband James passed away and she took it upon herself to keep their traveling plans after she retired. Frances bought a motor home and began going all over; from Texas to Arizona and even Alaska. She was an excellent cook; always making homemade bread and celebrated holidays with wonderful meals, gifts, and singing songs. Frances loved being a grandmother and great-grandmother. She was motherly to all of her children and anyone else in need. Frances had a very kind heart and soul. She was a devoted Christian woman and strong in her faith. Those left to cherish her memory include children: Philip (Deb) McIntire, Jone Marquardt, Tom (Judy) McIntire, Jeff (Linda) McIntire, David (Anna) McIntire, Lori (Scott Boyd) Taylor, Dan (Kathy) McIntire, Bill (Linda) McIntire, Scott McIntire, Todd (Lisa) McIntire and Mary (Ever) Espinosa; brother, Dan (Yvonne) Phillips, sisters, Mary (Vance) Tuma and Suzanne Loehr; sister-in-law, Rose Sheehy; 26 grandchildren; 36 great-grandchildren, nieces and nephews; and many good friends. She was preceded in death by her husband, James McIntire; parents, William and Delimah Phillips and grandson, Keelan McIntire. Online condolences may be left at www.fullertonfh.com. Fullerton Hage Funeral Home and Cremation Services, 401 Blunt Street, Charles City, IA. (641) 228-4211

The family of Frances "Fran" Delia McIntire created this Life Tributes page to make it easy to share your memories.

Send flowers to the McIntire family.