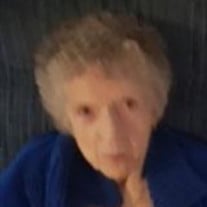 Edna Louise Wolcott, 86, formerly of Floyd, IA passed away peacefully surrounded by her loved ones at home on Tuesday, June 21, 2022. A celebration of life will be held at 11:00 a.m. with a one hour prior visitation on Saturday, June 25, 2022 at the Grace United Methodist Church, 701 First Avenue in Floyd. Pastor Mechille Boldt will be officiating. Per Edna’s wishes, her body was donated to Mayo Hospital in Rochester, MN to help further education and medical research. Edna was born on October 18, 1935 in Wakonda, South Dakota to William and Pearl (Smith) Dwyer. She graduated from Larrabee High School in Larrabee, IA. Edna was united in marriage on September 1, 1957 in Cherokee, IA to Jack Wolcott. The couple moved to Floyd in 1964, where Edna was very active in the community and the Grace United Methodist Church. She worked as a Library Aide for the Charles City Community School District for 40 years until retirement due to illness. In her free time, Edna enjoyed shopping, playing cards and having coffee with the ladies in downtown Floyd. She was an avid reader and loved reading until she was no longer able. Edna and her husband did a lot of traveling together throughout their lifetime. They traveled to places such as Egypt, Singapore, France and Spain, just to name a few. Edna and her husband also did a lot of camping and motorcycle trips with their family and friends. Above all else, Edna really loved spoiling her grandchildren and great-grandchildren. She was known for giving her grandkids treats, whether it was ice cream or even a little sip of pop. Edna would take her grandkids to Dairy Queen; she loved ice cream and chocolate. Those left to cherish her memory include her children: Christine (Mark) Guggisberg of Wilmington, North Carolina, Jack (Michelle) Wolcott II of Mason City and Arthur Wolcott of Charles City; grandchildren: Wyatt Guggisberg, Hannah (Brian) Guggisberg, Kristal (Jaimee) Wolcott, Mallorie (Allen) Hamilton and Chazz Wolcott; great-grandchildren: Faith Wolcott, Aidan Wolcott, Annabelle Wolcott, Nella Hamilton, Allen Hamilton and Tekaree Wolcott. Sisters-in-law, Virginia Wolcott, Pauline Wolcott, Judy Lubrant and several nieces and nephews. She was preceded in death by her husband, Jack Wolcott in 2014; parents, William and Pearl Dwyer and siblings: Margaret McCaughey, Dorothy Essick, Mary Ellen Miller, Harry Dwyer and Bob Dwyer. Arthur and Lois Wolcott, Jim and Jerry Wolcott (brother-in-laws), Kim and Tony Wolcott. Fullerton-Hage Funeral Home and Cremation Services, 401 Blunt, Charles City, Iowa 50616 641-228-4211. www.Fullertonfh.com, Facebook/Fullertonfuneralhomes

Edna Louise Wolcott, 86, formerly of Floyd, IA passed away peacefully surrounded by her loved ones at home on Tuesday, June 21, 2022. A celebration of life will be held at 11:00 a.m. with a one hour prior visitation on Saturday, June 25, 2022... View Obituary & Service Information

The family of Edna Louise Wolcott created this Life Tributes page to make it easy to share your memories.

Send flowers to the Wolcott family.