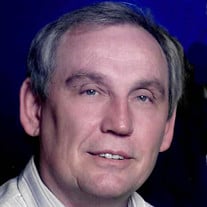 Delvern “Del” Orval Lindloff, 70, of Rockford, IA passed away peacefully on Tuesday, May 31, 2022 at his home in Rockford. A memorial service will be held at 2:00 p.m. with a one hour prior visitation on Monday, June 20, 2022 at Zion Lutheran Church, 805 E Main Ave, Rockford, with Pastor Robert Scheurer officiating. Inurnment will follow at the Riverside Cemetery in Rockford. Delvern was born on December 29, 1951 in Hampton, IA to LaVerne and Alma (Sandersfeld) Lindloff. He graduated in 1971 from the Rudd- Rockford-Marble Rock High School. On October 18, 1975 he was united in marriage to Marilyn (Schmidt) in Charles City, IA. The couple had two children, Travis and Andrew. Delvern worked at a car dealership for 10 years and then worked for IMT-Iowa Mold Tooling in Garner, IA for 26 years. He most recently worked as a janitor and maintenance for the Rudd-Rockford-Marble Rock school district for 7 years. His hobbies included working on cars and going to car shows to show off his 1966 Chevrolet Caprice. He loved cars and he loved going to NHRA drag races and watching NASCAR races or attending them. He would travel all over to go to races. Delvern also enjoyed sight-seeing and took many trips to Utah, Arizona and California visiting National and State parks. Memorable trips he had taken were to the Grand Canyon and to the Avenue of the Giants in northern California to see Giant Redwood trees. Delvern was a proud father to his two sons but his heart truly softened when he became a grandpa to his two grandchildren, Alyssa and Andrew (AJ). He cherished spending time with them, playing together and going to the park. He could be a quiet person at times but liked the simple things in life such as sitting outside relaxing in the summer/fall or sitting around and having a conversation about cars. He was a handyman and always knew how to fix things. Those left to cherish his memory include his wife, Marilyn Lindloff of Rockford; son, Andrew (Kristen) Lindloff and their children (Del’s grandkids) Alyssa and Andrew (AJ) Lindloff of Santa Rosa, CA; daughter-in-law Kendra Lindloff of Altoona; sisters, Wilma (Jerry) Williams of Marshalltown and Rose (Larry) Fitzgerald of Mason City; brother, William (Alexandra) Lindloff of Pensacola, FL; sister-in-law, Linda (Rodney) Tripp of Garner; brother-in-law, Harlan (Dorothy) Schmidt of Stacyville and many nieces and nephews. He was preceded in death by his son, Travis Lindloff; parents, LaVerne and Alma Lindloff; grandmother, Laura Sandersfeld and parents-in-law, Harvey and Evelyn Schmidt. In expression of sympathy, memorials may be sent to Hospice of North Iowa, 232 Second St SE, Mason City, IA 50401.

The family of Delvern Orval Lindloff created this Life Tributes page to make it easy to share your memories.

Send flowers to the Lindloff family.