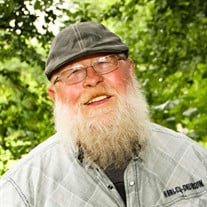 Dale J. Hertel, 69, of 1609 S. Carolina, Mason City, Iowa who died Sunday, February 18, 2018 at Hospice of North Iowa. Funeral services will be held at 1:30 pm, Thursday, February 22, 2018 at Fullerton Funeral Home, 123 2nd ST. SE, Mason City, Iowa. Visitation will be from 4 until 8:00 pm Wednesday at the funeral home and again one hour prior to services. Interment will be in Elmwood-St. Joseph Cemetery, Mason City. Those planning an expression of sympathy may wish to consider memorials to the Dale Hertel memorial fund. Dale was born in Mobridge, South Dakota the son of Henry and Vivian Hertel. His early education was there and he then attended school in Mason City. He joined the Marine Corps and was honorably discharged. His early career started at the Sugar Beet Plant then he worked for Curries for eight years. His employment for most of his life was as a truck driver for Carroll Sales. His final job was driving a Waste Management truck. Following his retirement he went back part time to Carroll Sales which he loved. Dale was united in marriage to Deborah "Deb" Proscovec on January 14, 1972 in Mason City. To this union was born two children Michelle and Timm. They loved to camp, and travel to the mountains and ride his '81 Electro Glide Harley Davidson. Their request is for everyone to dress casual and wear Harley Gear if you have it. Dale's past times included rebuilding a '55 Chevy which he entered into car shows and won many trophies for his work. But his greatest achievement was to have the ability to make friends, hang out with them, but most of all he so loved his family, grandkids and friends that is what made Dale, Dale! He will be riding in heaven keeping an eye on everyone. Those who loved Dale back completely is his wife Deb of 46 years, the two children that he called "Great", Michelle and her husband Chad French, and Timm Hertel all of Mason City, four grandchildren Brianna "Bri" and her long time best friend Dan Trustin, Ethan French, Chelsea Egger, and Lennon Hertel, his two sisters Sharon "Terry" Hamm, Julie "Tom" Erdmann, and brother Barry Hertel along with many nieces and nephews. His parents, nephew T.J. Erdman and several brothers and sisters preceded him in death. Fullerton Funeral Home, 123 2nd St SE, Mason City, IA 50401, 641-423-8676 Full obituary will be posted on www.Fullertonfh.com and Facebook/Fullertonfuneralhomes.

The family of Dale James Hertel created this Life Tributes page to make it easy to share your memories.

Send flowers to the Hertel family.