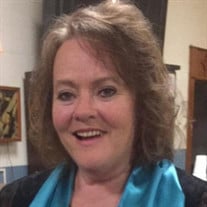 Cheryl “Sherry” Ann Butenhoff, 68, of Marble Rock, IA passed away peacefully on Sunday, March 13, 2022 at MercyOne North Iowa Medical Center. A Celebration of Life will be held at 2:00 p.m. on Saturday, April 30, 2022 at First Assembly of God, 1301 N Carolina Ave, Mason City with Pastor John Lynn officiating. Sherry was born on September 23, 1953 in East St. Louis, IL to Othmar “Simon” Niehaus and Patricia (Asa) Niehaus. Sherry was the oldest child, and because her father was in the Air Force, they lived all over the world, including Africa, England, Germany, and Alabama, but most of her adolescence was spent in Wichita Falls, TX. Sherry was previously married, to which she had four daughters. On May 3, 1983 Sherry was united in marriage to the love of her life, Richard Butenhoff, who raised the girls as his own, and together they had a fifth. It’s safe to say that Sherry had a big heart and desire to care for others. Sherry worked as an in-home daycare provider for many years while living in Texas and Mason City. Sherry and her husband Richard were also foster parents, and through the years had over 100 foster children stay at their home. Sherry absolutely loved cooking and couldn’t cook for less than an army. She enjoyed hosting meals at her home, especially on holidays and in the summers at her outdoor table large enough to fit everyone and anyone. Sherry’s favorite holiday was Christmas; she loved Christmas time with the decorations, cooking, and shopping. Sherry was an avid shopper, and was especially a lover of clothes, shoes, and purses. Sherry was a very creative and artistic person. In her younger years she sewed and enjoyed sketching and ceramics. Sherry loved horses and horseback riding; she had several horses throughout her life. Sherry and Richard moved to Iowa in 1985, and soon after, met their lifelong friends, Rich and Debbie Millard. Nearly every weekend, the couples would stay up playing cards while their children all played. Saturday nights, they would all go to The Surf Ballroom in Clear Lake to watch, “The White Sidewalls.” Later, they loved camping in Forest City with the Millards, and other great friends, Sharleen & R.C. Field. Sherry was an avid Elvis Presley fan and loved his music. She especially loved when her daughters would take her to “Elvis Tribute Artist” shows. She will be dearly missed as a loving wife, mother, grandmother, great-grandmother and sister. Those left to cherish her memory include her husband, Richard Butenhoff; daughters: Brandi (John) Clayton, Kristi Butenhoff, Ami Weese and JoHannah (Josh) Chambers; grandchildren: Jason, Kristen, Alex, Magdalena, Madalehn, Joseph, Riley, Samuel and baby Chambers on the way; parents, Simon Niehaus and Pat (Michael) Myers; sisters: Susan (Steve) McClure, Sophia Niehaus and Lena (Harry) Lavine and step-brothers, Christopher (Periann) Myers and Richard (Jennifer) Myers. She was preceded in death by her daughter, Nikki Weese; sister, Shelly Jennings and two brothers in infancy, Michael and Richard Niehaus.

The family of Cheryl "Sherry" Ann Butenhoff created this Life Tributes page to make it easy to share your memories.

Send flowers to the Butenhoff family.