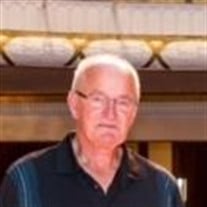 Bobbie “Bob” Solan Dow, 82, of Rockford, IA died on Saturday, December 18, 2021 at the Rockwell Nursing Home in Rockwell. A visitation will be held on Wednesday, December 22, 2021 from 5:00-8:00 p.m. at Fullerton Funeral Home, 302 West Main, Rockford. A private family graveside service will be held at Riverside Cemetery in Rockford. In lieu of flowers, memorials may be made to the family. Bob was born on October 12, 1939 in Mason City to Allan and Clara (Nauman) Dow. He graduated from Rockford High School. Bob enlisted into the United States Army and served from 1958-1961, until he was honorably discharged. On June 6, 1960, he was united in marriage to Karen O’Connor in Cartersville, IA. To their union four children were born: Billy, Daniel, James and Michael. Bob was a hard worker and devoted most of his life working in bridge construction. He helped build his first bridge at the young age of 17. Bob worked various places over his lifetime; including Comb’s Construction, Trettin Hatchery, Rockford Brick and Tile, Oliver Farm and as Floyd County Bridge Construction and Maintainer/Operator. Bob also owned and operated his own flooring business, “Dow Flooring,” where he refinished hardwood flooring for approximately 20 years. When he wasn’t working, Bob was an avid rock hunter. He enjoyed collecting rocks from all over; he also collected agates, geodes, arrow heads and fossils. Bob often took day trips to the Mississippi; he loved the river and loved building dams which he taught his boys. Bob liked to go sightseeing; he visited Washington, Tennessee, Michigan and many other places with a view and rocks to find. Above all else, Bob was a family man and loved playing with his grandchildren. Those left to cherish his memory include his wife, Karen Dow of Rockford; children, Billy (Denise) Dow of Rockford, Daniel Dow of Rockford, James (Debbie) Dow of Marble Rock and Michael (Amanda) Dow of Rockford; sister, Leona Hoel of Osage; 15 grandchildren: Andrew, Richard, Jacob, Marissa, Leah, Sawyer, Carver, Marcus, Sabrina, Tiffany, Anthony, Sophia, Joshua, Matthew and Emma; and 16 great-grandchildren with one on the way. He was preceded in death by his parents, Allan and Clara Dow; brother, Lawrence Dow; parents- in-law, Richard and Mary Myrtle O’Connor; brother-in-law, Derald Hoel; sisters-in-law, Joyce Dow and Maxine O’Connor; nieces, Linda Schlader, Melinda Stiles, and Cathy and Melissa O’Connor, and nephew, John Dow.

The family of Bobbie "Bob" Solan Dow created this Life Tributes page to make it easy to share your memories.

Send flowers to the Dow family.