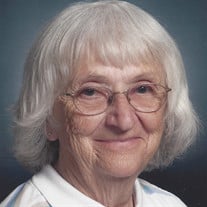 Funeral services for Betty Ann Swartzrock Griffin will be Tuesday, September 6, 2016, at 10:30 am with a one hour prior visitation at Saint John Evangelical Lutheran Church, 200 S Main St, Charles City. Reverend Bill Odormann will be officiating and interment will follow at Riverside Cemetery in Charles City. Betty was born on the family farm to Frank and Meta Emilie (Heitz) Swartzrock on August 31, 1929, and passed away on her 87th birthday, August 31, 2016 at the Floyd County Medical Center, lovingly surrounded by her children and grandchildren. Ulster #3 “one room school house” is where Betty proudly received her education. Much of her school work continues to be displayed to this day in the school house, located on the Cedar Valley Engine Club Grounds. Other than her children, saving the school house from destruction and having it relocated to the Club Grounds was one of her proudest achievements. Having two sons and four grandsons achieve the rank of Eagle Scout was also one of the highlights of her life too. Betty had numerous jobs throughout her lifetime from checking groceries at the original Trobridge store, to working at the former Floyd County Home and waitressing at various restaurants. She also did babysitting for many children and last but not least, her favorite job was working for Swartzrock Implement; going and getting “Brent” wagons and various other missions Steve sent her on. Betty and Lyle Griffin were united in marriage on January 7, 1950. Their love was always an inspiration to their children. Betty never removing her wedding ring, ever and the loving cards Lyle would give to her. Through good times and bad, ups and downs, fires and tornados; the love they had for each other will be forever in their children’s minds. Seven children were welcomed into their lives: son, Gordon D. (Brenda) Griffin of Thomson, Georgia and their children: Shawnna (Michael) Garner, Tonya Griffin and Alicia (Nathan) Stroup; son, Garry L. (Lori) Griffin of rural Charles City and their children: Meghan and Tyler Griffin; daughter, Debra A. Auringer of rural Floyd and her daughter Emilie (Chad) McMurray; son, Kenneth E. (Lisa) Griffin of rural Rudd and their children: Morgan (Josh) Brand, McKenzie Griffin and Kyle Griffin; daughter, Denise M. Griffin of Charles City and her son Devon Griffin; son, Danny I. Griffin of rural Charles City and his children: Jessica Usher, Dennis Griffin and Travis Griffin; daughter, Tammy S. (Daniel) Boggess of Chetek, Wisconsin and their children: Jason (Amanda) Griffin and Kariee Griffin; as well as 18 great-grandchildren; special cousin, Harold Swartzrock; special nieces, Linda (Don) Wheat and Kay Ann (Dick) Uetz; daughter-in-laws, Theresa and Lori; sister-in-laws, Arlene Lynes, Phyliss Bluhm, Margaret Swickerath; brother-in-law, Jesse Griffin; and numerous nieces and nephews. She was preceded in death by her loving husband, Lyle; parents; and brother, Lloyd. Fullerton Hage Funeral Home and Cremation Services, 401 Blunt Street, Charles City, IA. (641) 228-4211. www.Fullertonfh.com Facebook: Fullerton Funeral Home

Funeral services for Betty Ann Swartzrock Griffin will be Tuesday, September 6, 2016, at 10:30 am with a one hour prior visitation at Saint John Evangelical Lutheran Church, 200 S Main St, Charles City. Reverend Bill Odormann will be officiating... View Obituary & Service Information

The family of Betty Ann Griffin created this Life Tributes page to make it easy to share your memories.

Funeral services for Betty Ann Swartzrock Griffin will be Tuesday,...

Send flowers to the Griffin family.